The safety world has been telling employees to lift with their legs (knees) for decades…unfortunately this methodology is flawed in its generality and back injuries continue to plague many employees (1).

Simply telling people to lift with their legs has been the accepted concept for back injury prevention throughout the industrial world and has led to only modest success in decreasing workers low back injuries and claims. For Decades back injury prevention and safety staff have focused on guidance and instructions to lift with your legs and not your back. Though the advice is well intended, it is flawed by one critical factor. We are assuming that everyone knows how to lift perfectly with their legs, when in fact the majority does not. People have developed dysfunctional bending and lifting patterns so this advice means something different to different people.  This premise has led employees to perform bending and lifting movements by initiating the movement from the knees and then perform the lifting task by inhibiting the hip muscles and loading the knee joint and surrounding knee tendons. When the individual initiates the movement from the knees they often disengage the powerful hip muscles. (2) This faulty pattern of movement is often already present in the worker and further embedded in their subconscious movements. This makes it almost impossible to generate any significant power to perform even light to moderate lifting and causes nearly instantaneous overloading of the spine and/or knees. In other words, telling someone to lift with their legs and then showing them how to lift with their legs is not necessarily going to produce the desired results that we in safety are looking for.

Many people will not lift correctly even if you show them a hundred times and saturate the workplace with lifting posters. Success will come only when you re-establish proper body movement patterns and breakdown the old ones that developed as you aged. We always want someone to mentally prepare themselves when making a difficult lift so they are safe, but it is erroneous to expect an individual to be able to consciously plan how to lift something during every single task throughout a busy workday. 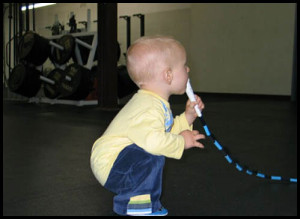 Here is what I mean when I say “re-establish proper body movement patterns”. When you were an infant you gradually learned how to roll, crawl, kneel, stand and of course squat against gravity. The child develops a pattern of movement that is bio-mechanically efficient as well as safe and becomes ingrained into their subconscious through thousands of repetitions. The squat technique performed by a toddler is almost always textbook perfect (3). All the while nobody told him/her to bend their legs and lift with their knees. We then develop new (usually bad) movement patterns that become ingrained in our subconscious and will be there until we make a concerted effort to re-establish the correct pattern. 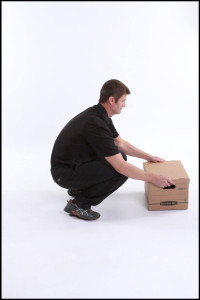 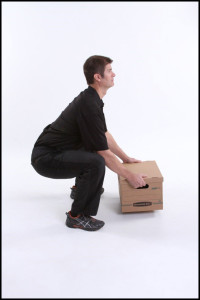 at I got your attention and told you to quit telling people to lift with their legs…then what do they do in order to squat perfect like the 2 year old at the playground. The individual must re-learn to initiate the movement from the hips and pelvis. As a result the knees will bend shortly after the hips but not go forward past the toes and thus avoid stress to the knees. Simultaneously you need to stabilize the core (torso) and transfer the force to the large muscles of the hips thus protecting the knees and back (3). The good news is that the proper pattern of squatting is still in our subconscious and we just have to dust off the cobwebs and reinforce the correct pattern.

This is far from a new concept and has been taught in the world of sports and weightlifting for decades if not centuries (4). The cave man likely spent most of his life squatting before the advent of the lazyboy.  In sports training… a proficient lift (squat) is taught with great detail and instruction. The squat is the granddaddy of lifting both in the world of safety and high performance sports. It is imperative to ensure that the movement becomes
instinctive and does not require conscious thought when your body is going to demand significant power during a difficult lift when your mind is focusing at the immediate task at hand.

We are suggesting a new paradigm in safe lifting for workers. This is a system to train the worker to instinctively move by initiating the movement from the hips and engages the core automatically which stabilizes the spine and transfers the load to the pelvic and thigh musculature and thus unloading the spine and knees during the lifting and bending mechanism (3, 4). It is imperative that the training be performed in a way that ensures the movement is entirely subconscious and thus second nature for the worker to perform during the hectic work environment.

Now for the good news.  All of your employees do not need to become high level power lifters and athletes. In would be great if we lived in a world where every employee would want to go to the gym 5 days a week and workout for 30 minutes a day but that just isn’t reasonable. It isn’t necessary for the employee to have the strength or endurance of an athlete, though it would be nice. What is imperative is that the employees need to learn to move their hips and use their core like a highly trained athlete. This can be accomplished in just a few minutes a day over the course of a few weeks and often times sooner with some individuals. I have trained literally thousands of people anywhere from 10 year old children in sports all the way up to 90 year olds with knee and hip replacements. It is never too late to teach an old dog a new trick. You may already be asking yourself….. Yes you do need to keep practicing to maintain these patterns and decrease the likelihood of the dysfunctional patterns becoming bad habits again.

With the proper training this can be accomplished with any size group of employees. The main focus is not athletic endurance and strength… just athletic body movements.  This makes it possible to train a large workforce without completely disrupting operations or be cost prohibitive. You simply need to find the trainer with the right skillset to make these concepts reality.

Now we can quit telling people to bend their knees and instead, show them how to hinge from their hips. Once an individual regains the proper squatting technique with the proper training, you will be amazed how good their knees and back can start to feel. This is much more than just injury prevention. This is about giving the employee back their quality of life as free of joint pain and injuries as much as possible.